All natural trails in the Park are currently closed due to rain and muddy conditions. 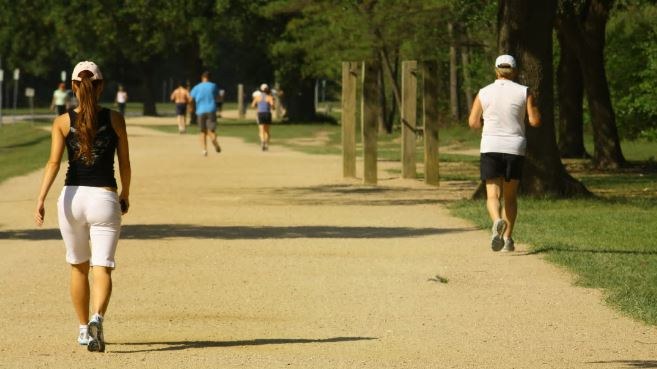 Like most runners who frequent the 2.93-mile crushed granite running loop, better known as the Seymour Lieberman Trail, at Memorial Park every week, I was surprised to find the path blocked off by large a green fence and Do Not Enter signage last night at the beginning of an easy six-miler. And there, directly off Memorial Loop Road, the emergence of an entirely new section of trail now open to the public. I left my Garmin at home, but this new trail seems to be about a half-mile long (more or less), and is lined with newly planted native flora, 100-plus parking spots (the Parking is metered, but will benefit the conservancy) and a more manicured aesthetic than ye olde running loop. There’s even a brand-new bathroom area with a water station and benches for resting.

This new expanse of trail is part of Phase I of the Eatern Glades, as the Chron reports, which is part of Memorial Park Conservancy’s masterplan, which aims to transform the grounds back into its natural habitat of prairie, savannah, and wetlands. The complete Eastern Glades will be completed by 2020, but for now, more sections of the Park will be blocked off to public access while staff achieve the return to natural habitat, replacing an abundance of overgrown invasive plants and trees with native species.

It’s all very exciting, and this new trail could be your first taste of the future of Memorial Park, if, say, you haven’t been poking around the Houston Arboretum & Nature Center lately, which is well on its way to restoring native habitat as well, so much so that it’s attracted an arbor-gator.

Do expect a bit more foot traffic than usual during this crushed granite trail’s debut, especially if you venture over there this weekend. It was crowded last night even after sundown, with families, exercise groups, and the usual suspects trying to get in their mileage out there—many of us taking in this entirely pleasant detour for the first time. What a treat.